Home Cinema Michał Wiśniewski and Marcin Prokop have been arguing for years. It...

The conflict between Michał Wiśniewski and Marcin Prokop began with the publication of an interview for “Gala”, in which the leader of Ich Troje suggested that his ex-wife Magda Femme she is a lesbian. Many people may not remember what actually happened in a high-profile interview. We managed to get to the archival issue of “Gala” from 2004, in which Wiśniewski revealed the story behind the breakdown of his marriage. In an interview with Prokop, he said that he fell in love with Marta “Mandarin” Mandrykiewicz at the end of his relationship with Femme, but he tried to save his marriage with the first singer Ich Troje, even though – as he also revealed – she was to regularly reveal him.

Michał Wiśniewski and Marcin Prokop have been arguing for years. It was about Magda Femme

Michał Wiśniewski in an extensive interview with Mandarin said:

Right after the publication of the interview, Michał Wiśniewski in an interview with “Fakt” he denied that in an interview for “Gala” he said that his marriage with Magda Femme broke up because the singer preferred women. In turn, “Super Express” reported that Marcin Prokop was surprised by “the change of the front of the Ich Troje leader”. “Yes, he did, and it is included in the published text. (…) The interview is an edited transcript of the tape. All the words that appeared in it were spoken during our conversation. (…) The text was authorized on his behalf by the team manager, who has always dealt with it “- explained the journalist, who added that Wiśniewski should be responsible for his statements.

Michał Wiśniewski and Marcin Prokop argue about an interview from 2004.

The currently ongoing dispute between Michał Wiśniewski and Marcin Prokop was renewed by the publication of the biography of the band Ich Troje, in which the band’s leader referred to the controversy related to the interview for “Gala”. In the book “Ich Troje. Biography” we read:

“We met on Saturday, and on Monday I got the text for authorization. When I saw this interview, I said it must have fucked up and I absolutely do not agree to authorizing such private interviews. Then I was informed that the interview was already in print. When I scared them with my lawyer, they said everything was taped. During the interview, Marcin turned off the recorder next to me. Apparently, when I left the room, he turned it on again. It was a mega fucking game. The guy made a career, but he went over the dead to his goal “- he summed up. Marcin Prokop, shortly after the publication of the book, issued a statement in which he presented his version of the events of 2004. In a Facebook post he wrote:

“Maybe she just doesn’t remember. has the right, considering the passage of many years and his famous lifestyle at the time, conducive to blurring the boundaries between truth and fiction. So: 1. I never drink alcohol while doing my job, dear Michael, and I don’t like vodka. Talk to the hundreds of people I have worked with over the past 25 years. If any of them have ever seen me “under the influence”, I’ll buy you Esperal. 2. Our meeting was not of a social nature. We arranged an interview with the newspaper, during which the recorder was on all the time. You answered my questions knowing that I was a journalist and not your psychotherapist or confessor. You devoted a lot of space and colorful, though intimate details to the issue of Magda Femme, which later became problematic for you.. I spared them by writing down the interview. I did self-censorship on your behalf because journalism is also about taking a step back sometimes. Therefore, in the material intended for authorization, there are only a few sentences about Magda, out of many spoken“- described Marcin Prokop. Then he added:

“4. Late in the evening, the same manager called with a nerve in his voice that Michał has just read (!) And does not agree to the publication. Unfortunately, at this point the newspaper was already in print, so you have realized that there is something in the text that you do not want, a bit too late. If you had read this interview yourself, Michał, when there was a time for it, without any objections, I would have deleted fragments that were embarrassing for you, that Maciej did not catch.. But maybe you couldn’t, or maybe you couldn’t. I do not penetrate. 5. I will not threaten you with lawyers, Michał, or demand apologies or corrections, because I have more interesting things in life than dealing with your phantasmagoria about me and funding gossip media for irrelevant, celebrity drama during the cucumber season. But try to be decent and please don’t repeat any more nonsense that has no real coverage. I wish you good luck in whatever you are doing at the moment, without my further participation in this adventure. That’s all “- wrote Marcin Prokop in a Facebook statement.

Michał Wiśniewski reacted to the words of the then journalist of “Gala”, saying:

“I don’t have to explain to the »crowds« how you can behave, because it is enough that I listen to the organizers of events about you very often. More than one smiling “gentleman” from television often turned out to be a “boor and bastard”. One can admit it – the other doesn’t. Fortunately, we were not alone at home and there are witnesses who drank and who did not, and – not least – whether or not the meeting was also “social”. The interview is authorized by the person with whom it was conducted, and not by a stranger who has never read it. You started printing illegally, without authorization. Fact? Normal? There were no embarrassing passages for me in this interview. Nobody sued me for this interview, because it was true. Pulled out of a private conversation, which of course I did not want to pass on. Recorded. You can be proud – you were one of the precursors. The celebrity is you, known for being famous. I am the creator and author. I’m not going to make a drama out of it. Now get ready for tomorrow because a million more important topics on TV are waiting for you. And hold on, because in court you would “bleed out”, like the one who sold 68 million records in China … Karma, you know what …? “- he wrote in a statement. 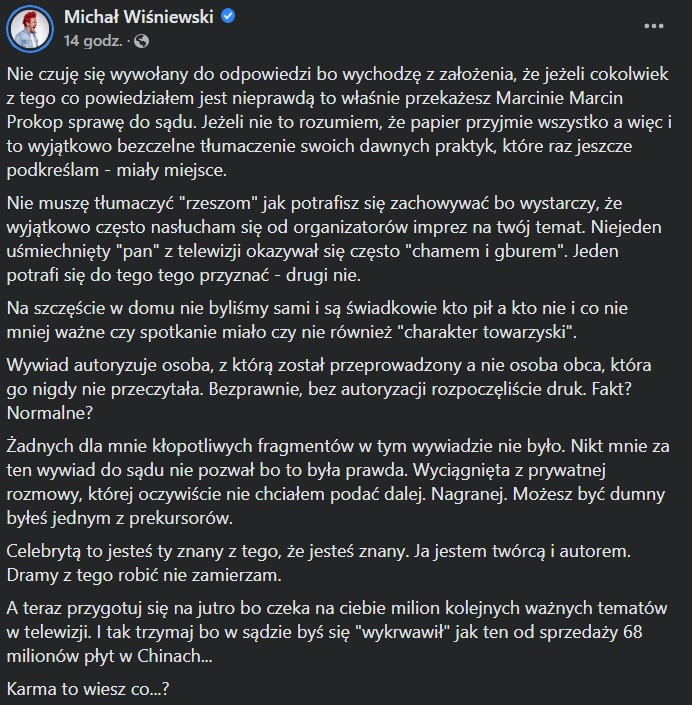